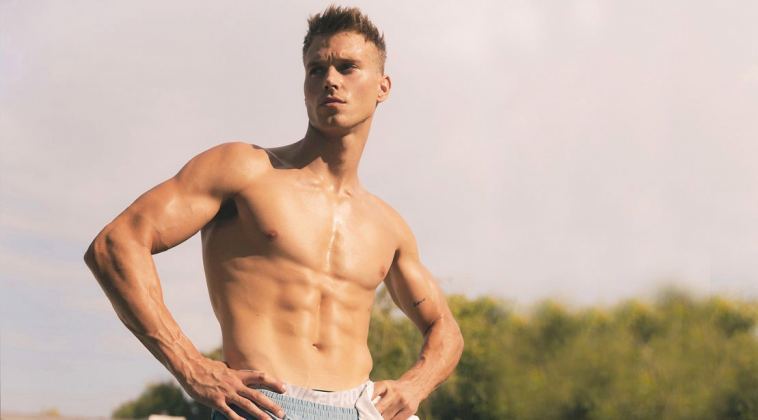 Instagram is a great source for fitness motivation, but a quick scroll on the popular social media platform may also leave you green with envy. It’s easy to assume that the person behind the picture enjoys a hassle-free lifestyle, with all the time in the world to train. But you can be reassured that’s not always the case.

As fashion-sensation-turned-actor Matthew Noszka tells Muscle & Fitness, having his baby daughter attached to his lap nonstop serves as unequivocal proof that finding time to stay in shape is a challenge we all must face, even shredded supermodels.

Born in Pittsburgh, Noszka first shot to fashion fame in 2014 while working as a construction worker. After posting images and networking on Instagram, Noszka’s great looks and tall, muscular physique were soon discovered, garnering some of the most prestigious contracts in the industry, including projects with Nike, Calvin Klein, Hugo Boss, Tom Ford, Ralph Lauren and Versace.

Now at age 28, Noszka has settled down in Los Angeles with his partner, fellow social media icon Inanna Sarkis. The couple welcomed their first child into the world in 2020.

Noszka has also been bitten by the acting bug, and most recently appeared in the Netflix movie, “Let it Snow.” So how does he maintain rock-solid abs with such a hectic lifestyle?

“I understand that it’s hard,” says Noszka. “I get it… finding the energy and the motivation in the morning, and getting up, and getting after it, it’s very difficult. With all our schedules, having children, working, paying bills, as well as finding the time to work out, the biggest message I really want to get across is that if you have 30 minutes to train, then that’s 30 minutes better than zero minutes. If you are putting those 30 minutes in, then you are progressing, but if you say, ‘I’ll train tomorrow,’ then you’ve lost today. And if you do that again tomorrow, you’ve lost tomorrow. So really just hold yourself accountable.”

As an avid basketball player (his grandfather, Stan Noszka, played for the Boston Celtics), Noszka has found that shooting hoops is a great way to stay fit and burn calories. In his line of business, a call could come in at anytime for an urgent shoot, so he must stay in the best possible shape all year round to look his best on every campaign. “When preparation meets opportunity, that’s when success is right around the corner,” says the cover star.

As a model that frequently works with fitness brands, Noszka’s abs need to be strong and thick, so simply cutting his weight won’t provide the look that his client’s need. “Everyone’s body type is different. Some people have a very fast metabolism, they can work out, eat a lot, and still maintain some type of definition,” Noszka says. “It varies for me. If I’m not active, then my abs suffer.”

When looking to put on muscle, Noszka will eat more carbs, but when it’s time to get ripped, he’ll work his abs every day. Still, the old adage that “abs are built in the kitchen” holds true for Noszka. “Ninety percent of it is what you eat,” he says. “If you want abs, and you want to be shredded, you’ve got to stay away from sugars. I stay away from dairy and bread. If someone is trying to get a six-pack, I tell them to avoid those things.”

Noszka is also a proponent of keeping his heart rate up during his workouts, and likes to incorporate balancing activities into his ab workouts. He’s formulated a number of nutrition plans and workouts, including a 15-minute-ab program on his new app. Sticking with a keto-friendly diet, Noszka relies on a morning dose Bulletproof MCT oil to get him through his daily routine of workouts and fatherhood. “It’s incredible,” says Noszka, who boasts more than a million Instagram followers. “MCT Oil was the most natural thing that I could find. I can throw it in my smoothie every morning. It gets me going for the rest of the day, because as little as my daughter is… she can exhaust you [laughs].”

“This particular abs exercise is one of my favorites, because it tests your will power”, he says. 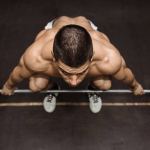 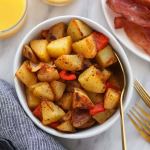