Pack your lunch or dinner with tons of veggies and warm spices. This Cauliflower Tikka Masala recipe is vegetarian, loaded with hearty ingredients, and the best recipe for fall or winter meal prep!

This is one of those recipes where the day we perfected it at Fit Foodie HQ I wanted to tell EVERYONE about it. Instead of doing that, I’ve made it about 4 times and every time it got better.

We love how warm and lovely the flavor of this cauliflower tikka masala is and that it’s naturally gluten free and vegan. Even the non-vegans out there will love this.

Lucky for you this is a one-pot meal. That’s right, you throw everything into one giant pot and dinner is ready in 30 minutes. Here are some other tips + tricks to keep in mind before you make this cauliflower tikka masala recipe!

Don’t be scared of flavor. Oh, don’t go light on the spices. This is supposed to a dance party in your mouth. If you haven’t ever worked with a masala spice blend before, don’t be nervous!

If you don’t want to add as much as we did, start off by adding a teaspoon of spices at a time until you find a spice level you are comfortable with.

We love naan. We served this recipe with sprouted brown rice and naan. Check out TJ’s or Whole Foods for naan! I’ve never made my own, but I hear it’s pretty easy. If I did make it, I’d follow Gimme Some Oven’s recipe.

Pack it with veggies. Let’s talk about the veggies in this dish really quick. We decided to use dense vegetables that would sustain us! Here are the veggies we used!

If you’re not digging our veggie choices, try using normal potatoes, any kind of root vegetable, or squash!

If you insist on adding meat, I’d go with chicken, or maybe even meatballs. OMG TIKKA MEATBALLS WUT.

Everything You Need to Know

Tikka Masala is traditionally a tomato and cream based sauce mixed with traditional Indian spices. We substitute the traditional cream ingredient for coconut milk so this tikka masala recipe has an earthy, slightly spice, coconut flavor.

What is Indian masala spice?

Indian masala spice is a mixture of ground Indian spices such as fennel, black pepper, cloves, cinnamon, mace, cardamom, curry, cumin, and coriander. It is a flavor-packed spice mix that is great to have ready to use in your pantry.

What can I serve with this cauliflower tikka masala recipe?

Can I make this tikka masala recipe in the slow cooker?

Place all ingredients for this tikka masala (except for the peas) into the slow cooker and cook on high for 3-4 hours. Add the peas with about 30 minutes left in the cook time.

Serve over rice or your favorite accouterments.

You can also make this cauliflower tikka masala and freeze it for later. Let the tikka masala cool completely before placing it in an airtight container. Label the container with the date it was made and store it in the freezer for up to 3 months.

Thaw & Reheat: When you are ready to eat the frozen tikka masala, remove it from the freezer and let it thaw out in the refrigerator. Sometimes this can take up to 24 hours.

*If using frozen peas, add right at the end.

*Nutrition is for 8 servings and does not include rice. 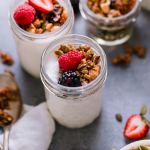 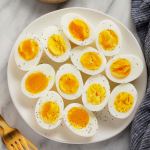